Musings of a hobbyist - episode three 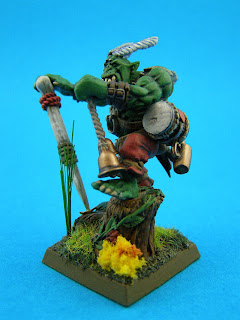 Teeny-tiny update today; I redid the shaman on foot. Saying "redid" is actually an overstatement: I've just added some clump foliage to the base and reinforced some joints on this mini. Nothing serious, but still I brought him to the army's overall level methinks.

Here are some detail shots... 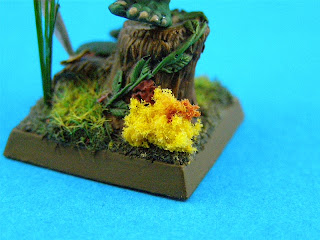 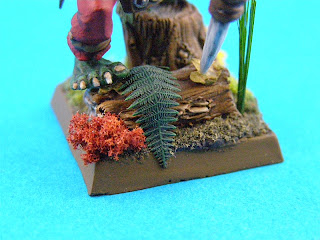 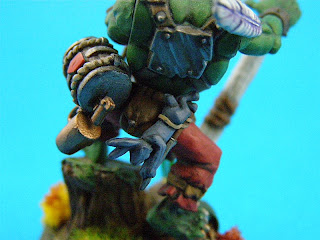 Hello after the holidays. Usually at this time of year my level of nausea reaches heights unimaginable; this year has been much different, but that's another story.

Hobby-wise, I managed to start the Big Stabba team for the savage orcs. Like so: 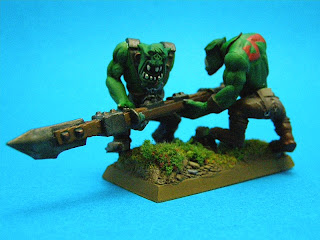 The chariot thriller (yep, that's the word for it!) was a bitch to align, in retrospect I'd be much better off having the orcs carry it over their heads. As of now the green stuff on the other two arms is curing and I will be done with this project come Wednesday. Enjoy!

Let it be known that for the week starting today I will be enjoying my vacation, with as little elctronics as possible.

Updates shall resume next Monday. Happy holidays everybody!
o 2:55 PM No comments: 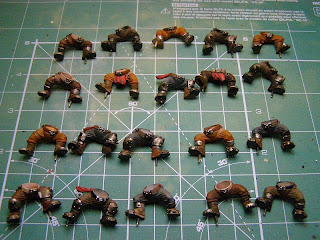 Here they are. Twenty in the photos, but there are three more pairs I left out. So glad to be done with them, such a boring job. Now on to the torsos. 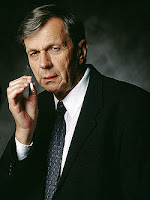 Good evening to my fellow hobbyists. Tonight I'd like to present to you the second part of my holiday wish list. In part one, I focused solely on Games Workshop, so today let's look at other companies and the fans ourselves. After all, we make the hobby just as much a GW does, in my understanding, and having said that we are not without faults.

I received nice feedback on my previous list and I'm glad more people share my views. Sometimes I really think I'm the only one who thinks this and that. Thanks for the support.

So, here it is, Drazhar's Hobby Holiday List, part two.

Hello on a surprisingly warm December morning. Seeing as the holidays are nearly upon us and for some reason it has become customary to celebrate them by giving gifts, I'd like some gifts myself. But mine are not material. I don't like to receive major stuff I haven't worked for and furthermore, the ones on my list would make me much, much more happy than another worthless trinket.

My list comes in two parts, one aimed specifically at Games Workshop (and generally the producers of our hobby materials) and the other, well, you will see.

So here it is, Drazhar's Hobby Holiday Wish List. 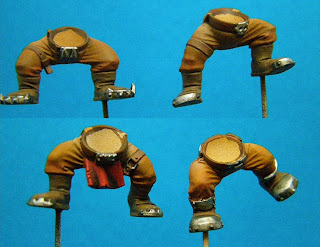 Surpised, aren't you? Don't worry, I'm not trolling you in any way, these are actually for my savage orc unit. Just a very... let's say "unorthodox" one.

I went for the 40k ork legs for very simple reasons - they are better cast than the fantasy ones and I got about ten pairs for free. Plus, they will make for a nice contrast with the torsos I have planned. 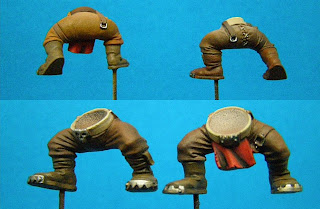 I have ten pairs finished at the moment. Thirteen to go. Stay tuned.

...almost. I will add the clump foliage after the miniatures, I find it much better looking in the end. 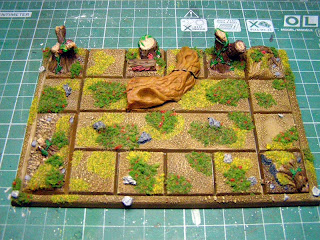 And a shot from the back: 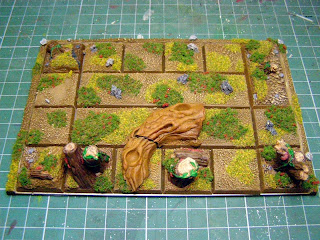 See you folks Friday, thanks for looking!
o 3:12 PM No comments:

Product review - Blood in the Badlands

Welcome to another week. Holidays are nearly upon us and this release by Games Workshop could not, in a manner of speaking, be coming at a better time. Read on...

What is it?
Blood in the Badlands is a campaign that has been, apparently, played by the GW staff over the course of the current year. It is not a rules expansion the size of, for example, Storm of Magic. That said, it does have notable rules sections, but if you are looking purely for the rules you will be disappointed.

Scenarios and rules aside, it is essentially a very big piece of narrative that could easily appear in several issues of White Dwarf.

How does it look like?
The book is a hardback, a hundred or so full color pages. It's the same format as the new army books, the rulebook or the Storm of Magic book, making for a great look on the shelf. It doesn't have anything in the line of SoM's magic spinner or the like.

What's inside?
After a brief introduction to the publication we get to the description of the Badlands as a region of the Old World. Fable-wise, BitB is a very decent, solid source of information about the region and its places of interest. What is even better, some locations (like the Iron Rock) actually get their own rules in the campaign. A nice touch.

Then come the guidelines for playing the campaign yourselves. The plural here is well justified, as the optimal number of players oscillates in the region of seven to ten. To play the campaign you will need the Mighty Empires expansion (they recommend getting two copies in the book) or some other means of making a modular campaign map.

Sounds more and more like an elaborate commercial, hm? That was my impression as well...

The main body of the book is a report on how the campaign progressed. While nice to read on the toilet or in the bus, I don't think it warrantied such a big section to be devoted to it. I'm not really interested how some other people play. But for those of you who enjoy such things it's a brilliant read. Moreover, it's intermingled here and there with pieces of fiction and bits of background, making the reports quite enjoyable to peruse.

As for the rules, to start with we get some for playing the campaign as a whole. These are really decent and play quite easily from the looks of it. The only thing that's actually bad is that everything rests on that last battle and the winner takes all - whoever wins that last scenario (and it's batshit crazy!) wins the campaign, which kinda defeats the point of playing for me...

The campaign rules have all kinds of little tasters like changing seasons (each with its own rules), pre-battle events, units gaining experience and so on. All these deepen the campaign play by a fair amount and look pretty darn enjoyable to play with.

We also get quite a few specific scenarios and some of them are very strange. I'm not really in a position to say they are great or terrible, they are just odd. Aside from the last one, which is insane (a seven person game played on two tables simultaneously). You will need the Storm of Magic ruleset to use some of them, however.

The two rules expansions are underground battles and sieges. Both sets are well-written, play very straightforward and clearly were quite thoroughly playtested. The scenarios provided for underground fighting, for instance, use H- or plus sign-shaped battlefields. I'm really curious about how they actually play, but from the looks alone they seem pretty fun.

Siege rules are much more straightforward and, to be honest, much easier to grasp than their previous incarnations. Along the lines set by SoM, you get an extra points allowance for siege equipment (some pieces of which are great, very characterful bits like sallies and undermines). They are designed to play fast and brutal, a trend established by the eighth rules edition and I'm glad GW sticks to it. And siege towers and rams are back - yay!

Who is it for?
Definitely gaming clubs and organized groups of players. The campaign rules are pretty open and there is nothing stopping anybody from adapting them to your own settings. If you can make the hexes for the map (this one is pretty important, the hex shape actually has a point in the rules) you are free to go without purchasing the Mighty Empires kit and I think GW purposefully made it so. The seasons can easily be stretched or condensed (in BitB each season lasts three campaign turns, making for a twelve turn campaign), some scenarios are actually designed to influence others.

Plus, the price tag is bearable as far as GW products go.

As I said before, if you are looking purely for rules, this product actually offers little of them. Siege rules could have easily been published in White Dwarf. But Blood in the Badlands is a clear-cut novelty product, made by fans and for fans. It is purely meant as a curio, a gem for your hobby shelf and a perfect gift for a Warhammer enthusiast, something they would probably not buy themselves.

Because of the above, it is hard for me to give Blood in the Badlands a star score. I can recommend this product as a gift, something to put on your holiday list and to hint to your gift-givers. Otherwise, your money could probably be spent on miniatures.

Unless you are a fan. Then there is no argument. If you are looking purely for anything Warhammer-flavored, you will be satisfied. 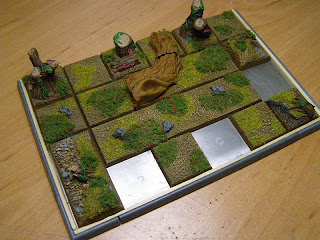 Hello and welcome to my newest project. Not much to show today, just WIP shots of the bases for my savage orcs. Not all are done, obviously, and the tray is barely assembled. Still lots of work to be done. 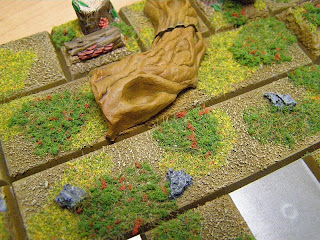 Here's a closeup of the strip bases. First time I've used these. 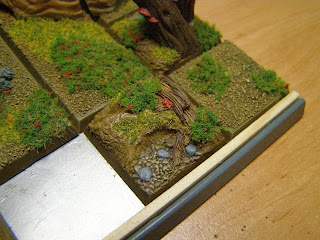 Some resin scenic bases are added. These are from Back to Base-ix, an Australian company. Yes, I have bases from literally the other side of the world. 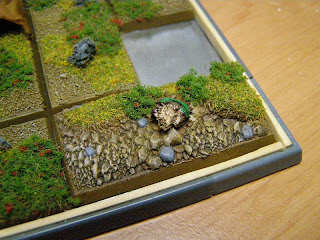 Big stabba base. I know big stabbas are considered not worth the points, but since I don't plan on playing in any tournaments, this is not an issue. And they are just so characterful.

There you go. Have a great weekend folks!